Age of Empires 2 is possibly the best strategy game ever made. It is one of my favourite games and I have spent many hours playing it. I remember first playing it in the early 2000’s and I still have my original cd in its square case, with the 3 kings staring angrily outward. AoE2 remains a massively popular and beloved title today, and below are some reasons I think it is so great and has remained so.

2. Replayability – It is easy to play again and again because every map and scenario is different and the layout of resources and terrain always changes. For almost 20 years I have been able to keep playing without it feeling repetitive or boring, and this is testament to the quality of the game.

3. Multiplayer – The multiplayer community is still strong and it is always possible to find a match. There is also a great competitive scene which demonstrates the love that people still have for a more than 20 year old game. A recent tournament I watched topped 50k viewers on Twitch during the final match.

4. Support – Development support for the game is ongoing. New dlc, patches and tweaks still occur quite regularly and this keeps the game feeling fresh. The release of the Definitive Edition also gave the game even more depth, both graphically and game-play wise.

5. Unit variety – The number of troop types and unique civilisation units is fantastic spanning from the early medieval period to the Renaissance, from the Mongols to the Aztecs. Woad Raiders, Tuetonic Knights, Flaming Camels, Archers, Bombards to name but a few.

Overall, AoE2 is simply a fantastic game that has stood the test of time and keeps me thoroughly entertained every time I play it.

My thoughts on Battlefield V (BFV)

If you have been on the internet recently, you will have seen the controversy surrounding the release of Battlefield 5. Despite a large amount of negative publicity and some interesting responses from developers, I think that in general BFV is a decent game and I definitely enjoy playing it. There are plenty of good points to the game but there are also a lot of problems that often leave me frustrated.

I play BFV with my mouse alongside VoiceAttack which gives me the ability to use most commands if a little slower at times.

Setting – The setting of WW2 is always been interesting to me (even if not completely accurate in BF5). I have studied it a lot and its depiction in games is definitely cool. Despite some of the strange aesthetics, the battles do have a sort of epic feel to them. It would be nice to get more maps and theatres but hopefully those will get added in time.

Guns – The guns are nice. It’s great to see more of the British guns in a WW2 game like the Bren gun, and obviously the classic German weapons (mp40, stg44 etc.) have a good feel. The sounds are nice too but I am definitely missing some of the iconic US guns. No Garand in a WW2 game?

Squad system – I quite like the squad system, I haven’t had a problem with it yet. I like giving the orders occasionally, and calling in a V1 was cool and it works consistently for me.

Quick deaths – You die so quickly. I don’t play Battlefield games at a fast pace, I try to play methodically but too much of this game is run forward, die, run forward, die, rinse repeat. This cycle can get tedious very quickly I sometimes I find myself thinking this is not fun at all.

Close-range snipes – Being one-shot from a sniper from 2 feet away is one of my biggest problems but maybe this is just me not being very good, but I feel if I am firing at them I shouldn’t be popped instantly from that close.

Maps – there needs to be some more maps because I think some are terrible, especially if you get some of the imbalanced matchmaking that can occur. Also, some Grand Operations maps feel ridiculously hard to attack and win like Halfaya or Twisted Steel.

Long loading times – the time it takes to get back to the main menu is too long. It takes longer to leave a game than to join one and a two minute black screen to back out of a game is just ridiculous and needs sorting out.

Hard to spot enemies – It can be difficult to spot or even see some players. I have a hard time spotting players and it feels bad when they suddenly kill you from somewhere I should have been able to see them.

Overall, I do like the game and hopefully it will keep getting improved and having more content added for free. There are many more points to talk about beyond the ones I have gone through such as the buggy bipod but I will leave it here for now.

About two weeks ago I received my new Microsoft Adaptive Controller for my birthday and I am pleased to say that it is a very good product so far. I have only played one game with it as of yet but it really has improved my gameplay experience. The controller is compatible with pc games so I fired up Star Wars Battlefront 2 to see how my setup would work, and it was great. 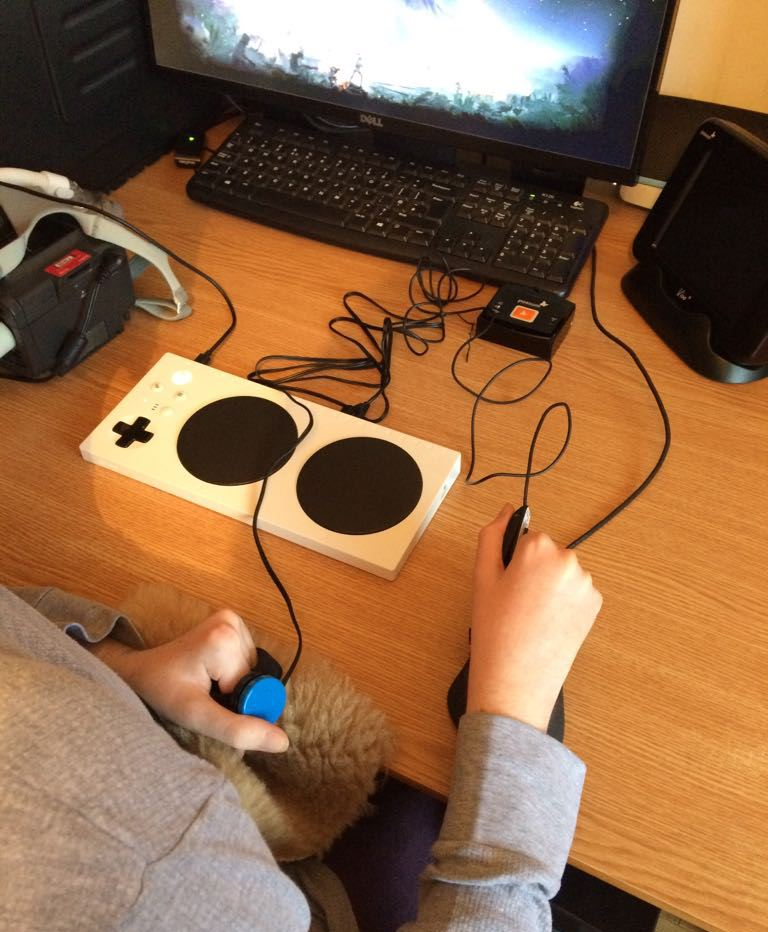 Using the Adaptive controller alongside my mouse and headset gave me extra buttons to press allowing me to speed up my responses to enemies in game. I normally use right-click on my mouse to move forward, so to aim I connected a clicker into the left trigger input on the controller which gave me an easier way to do so, quicker than using voice controls and saying ‘aim’ into the microphone. You might not think it much difference but it definitely helped me zoom in faster. I was also using another clicker for right trigger as well in my left hand which produced a similar result, faster shooting resulting in more points. 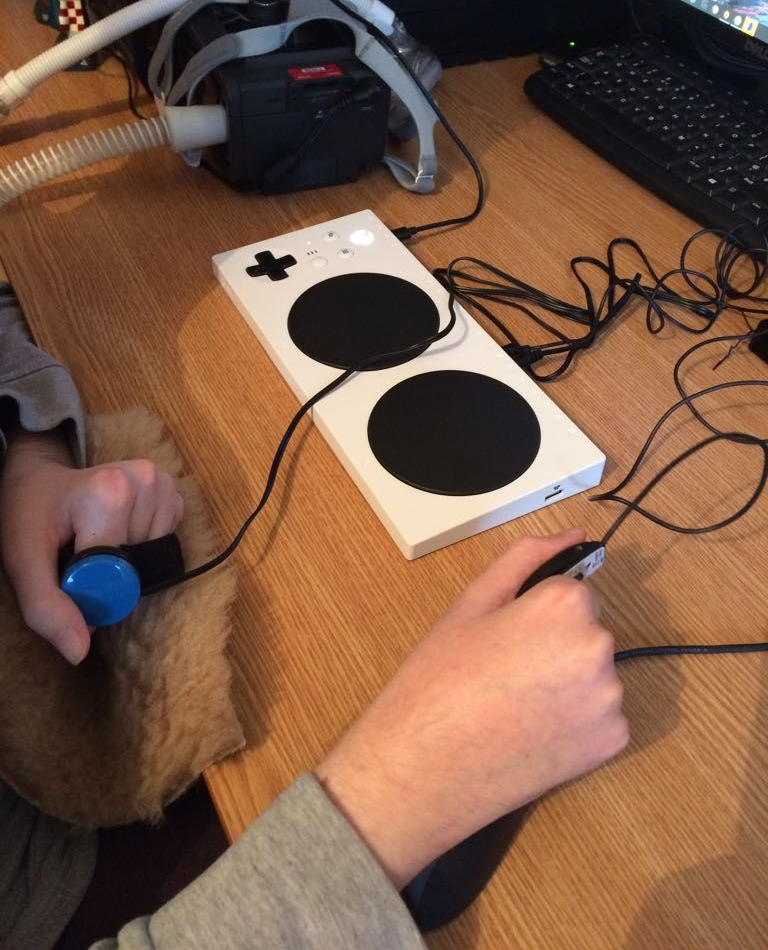 At first it was slightly confusing for me to get to grips with using so many different inputs at once (voice control, mouse clicks and controller buttons) but after 3 games I was adjusted to the additions and surprisingly was scoring more points and kills. Being more competitive definitely feels more fun as normally I’m can be just a little slower in reacting.

I am going to enjoy testing it further and pushing my limits on different games too. I am unsure if it will be compatible with all of my pc games but I imagine any game where you can use a controller will work. Adding more buttons and arranging them in good positions is my next challenge, but so far so good. Overall, I think it is a good addition to a gaming setup and hopefully more companies follow the lead in giving disabled gamers greater access to games.

There are now many types of controller and methods of adapting controllers to help disabled gamers. I have a Mad Catz Xbox controller which I bought a few years ago after I had a home visit from the charity Special Effect. Afterwards, we concluded that it was a good option because you could swap the analogue sticks around to different locations and it was compatible with pc as well. In addition to the controller, I have two micro-switches attached to be able to use the trigger buttons which work using various pieces of software like cronusmax. Micro-switches and buttons are very useful for improving your gaming experience as they can be placed within easy reach so give you a more comfortable button layout. With Duchenne, it becomes too difficult to properly hold a controller, so anywhere a button can be adjusted or replaced with something easier to press makes your response quicker and your game better. How the controller is positioned is also a factor in adaptations. I use a clamp and a flexible arm to attach the controller to my wheelchair in a comfortable and easy to reach place just in front of my hands. Below is a picture of me set up with the controller. 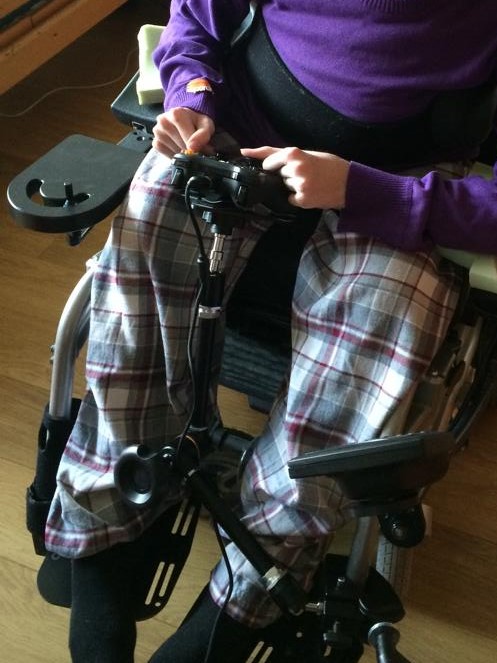 Furthermore, I am looking forward to trying out the new adaptive controller from Microsoft to see how useful it could be. It definitely looks like it has great potential to make gaming easier by creating a sort of hub for all the different controller inputs like buttons and triggers. It is good to see disabled gamers being considered and catered to more and more with new technology by companies and developers. There are now many emulators, button mappers and controller types to choose from to help disabled gamers, which is a very positive thing. Without these options, I would not be able to enjoy many of the games I love, and by providing these methods, game developers are improving the inclusiveness of gaming. 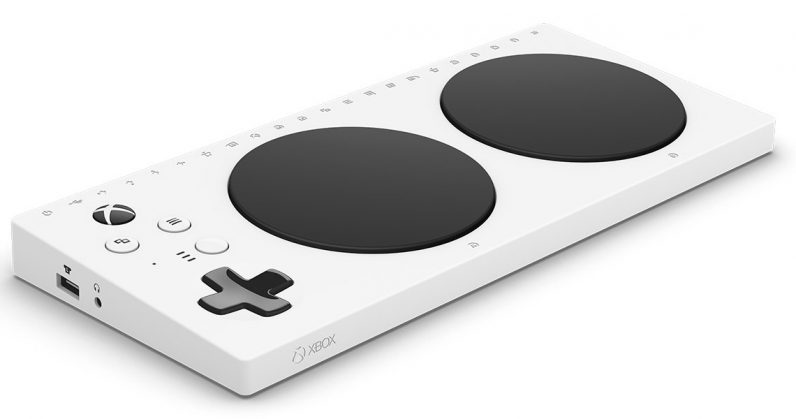 Where has this been all my life? I recently stumbled across this piece of software while looking for a new mouse. I went onto a website and saw someone using VoiceAttack to help them play some games, so I thought I’d give it a go myself. I would definitely recommend buying it as it is easy to use, requires very little training, and cost less than £10. VoiceAttack allows you to use voice and other actions to input commands. Using a microphone, for example, you can create a voice command to press a button or perform an action in game. I have used other similar software before for my console but not to play pc games, and VoiceAttack is a really great way to enhance your gaming experience. So far I have only played one game (Star Wars Battlefront 2) with VoiceAttack enabled, but it made it so much more fun. Rather than just using mouse clicks to move and fire, which is my normal method, I can use powerups, crouch and jump just by saying ‘jump’ or ‘aim’ for example. You can also create a number of profiles, which can be tailored for each game you play and changed very easily.

Gaming is something that I very much enjoy doing, both on pc and console. A lot of games are not the most user friendly for people with Duchenne given the lack of strength in our arms and hands, but increasingly disabled gamers are being considered by developers. There are now lots of other ways to improve your experience, such as with micro switches, adapted controllers, and voice commands, a number of which I have only just learned about. In this section I want to talk about games I like and the various methods to improve gaming experiences for disabled people.